CLICK HERE FOR UPDATES
COVID-19 – Instructions for the health and safety of our patients.

Your specialist or your GP may refer you for a Pelvic Ultrasound. This is a common procedure that begins with gel being applied and an ultrasound probe being placed in your lower abdomen. The full bladder is used as a window to see your uterus and ovaries and any other surrounding structures. In majority of cases a transvaginal (internal) ultrasound will also be offered to gain the highest resolution and further detail of the lining of your uterus, uterine anomalies, fibroids and to take a closer look at your ovaries.

Only with your consent will a transvaginal ultrasound be performed. You will be asked to empty your blacder and then when you re-enter the ultrasound room you will be asked to remove your underwear and either put on a gown or be covered with a sheet and lying down on the bed with your feet on a lower platform. The small, narrow sterilised transvaginal transducer is gently placed a small way into the vagina The probe is moved from side to side to gain views of the ovaries and other pelvic structures. The sonographer may need to gently push on your lower abdomen with her other hand to displace overlying bowel gas. For more information on this examination please read: the transvaginal information sheet.

Reasons that you may need a pelvic ultrasound include:

Pain may be caused by any organ in the abdomen, and as such is often difficult to determine an exact cause without ultrasound. Discomfort with the onset of a period is normal, but severe pain should be investigated. It could be an indication of conditions such as endometriosis and cysts, these are best diagnosed by a Pelvic Ultrasound.

Menstrual bleeding usually occurs every 28 days, although each cycle is different and some may be longer or shorter. At times the cycle may be irregular or bleeding may become heavy. This may be due to a temporary hormonal imbalance but it may also signal a problem in the uterus or ovaries such as fibroids or an endometrial polyp which is a small growth in the lining of the uterus. Polyps can cause heavier periods or unusual bleeding. Most polyps are not cancerous but may become so if not treated. They can be seen on transvaginal ultrasound but sonohysterography allows easier detection.

A fibroid is a benign growth of fibrous muscle tissue which develops in the wall of the uterus. Fibroids range in size from 5mm (the size of a pea) to 150mm (the size of a football). They are very common and are present in up to 30% of women. They generally do not cause any problems and many women go through life with their fibroids unnoticed.

Some women do however run into problems which may include:

Infertility may occur as a result of blockage of the fallopian tubes. Such a blockage may prevent the sperm from meeting the egg just before conception or prevent the embryo’s passage toward the uterus. Fertility may also be reduced if the fibroids significantly disrupt the cavity of the uterus. Sonohsyterography or HyCoSY can also assist in determining the fibroid’s effect on the cavity or fallopian tubes.

Irregular bleeding can result due to enlargement or distortion of the uterine cavity by fibroids. A fibroid extending into the cavity can also cause heavy and irregular bleeding.

If fibroids enlarge to such a size that they outgrow their blood supply degeneration of the muscle may occur and pain may result. Degeneration may also occur in pregnancy. Both of these complications are rare.

Problematic fibroids may be treated with a variety of hormones to decrease their size. It may however, take several months before a reduction in size is noted. Other fibroids may be dealt with by surgery. If the fibroid is small and positioned within the cavity it may be possible to introduce a narrow telescope into the uterine cavity and remove the fibroid. Larger fibroids are usually approached either through keyhole or open surgery. 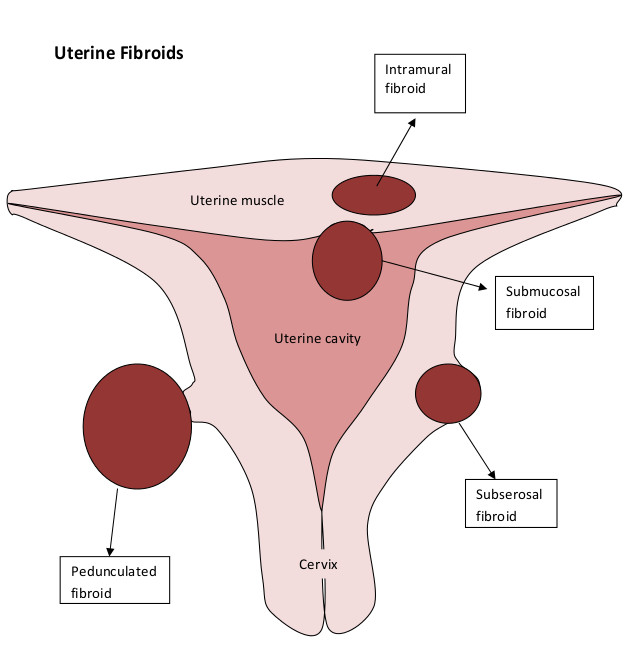 You will need a copy of your referral to complete a booking.
Due to the time required for some appointments, not all appointments can be booked online,
for more information, please read our booking guideline.

What type of appointment are you looking to book today?

Our normal opening hours are 8am to 5pm, Monday to Friday, Sydney time.